Self ("Eleven Years" by Jen Davis) 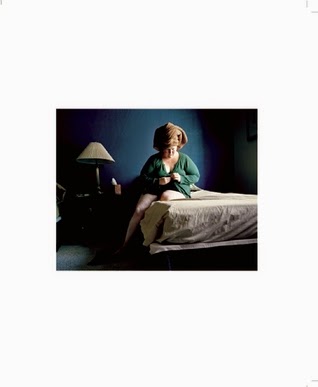 More than a decade ago, Jen Davis sat down in the sand of a South Carolina beach and took a photograph of herself. Featured in Eleven Years, this image shows Davis--overweight, pale, clad in a loose-fitting black tanktop and shorts--surrounded by two thin young women and a lean young man, all of whom are showing much more skin and seem almost unaware of her. She would continue taking photographs like these, in which she is alone in her own body--alone, even when in the company of others--until, years later, when she was suddenly among graduate students who did not know her, who looked at her photographs and talked abut her body in such a way that her body became unbearable. "I needed to make changes," she later said. "I didn't want to wake up at forty and be in the same body." She underwent laparoscopic surgery and, as some of the images in her collection demonstrate, lost much of that excess weight. Before then, however, she documented her life--her body--in photographs.

The harsh truth of these photographs, however, is that Davis' body is the reason for their popularity, for it is her body that elicits a reaction from viewers, demands analysis and commentary, and provokes controversy around the question of intent. Had Jen Davis been a slim, fit college junior when she took these photographs, they would have had little impact, as our society advances images like those on an almost continuous basis. There are clothing advertisements, billboards, magazine spreads, runway shows, and a near endless supply of movies and television programs that seem to portray a world populated by nothing but sultry, sexed-up young women with flawless skin and piercing confidence. As Anne Wilkes Tucker points out in the afterward to Davis' book, "Were it not for Jen's size, her pictures could easily be perceived as presenting a skilled and intimate life chronicle of a twentysomething girl. She hangs out with friends, eats at the local grill, washes clothes, and performs other daily activities."

While it may not have been her intent, Davis' photographs expose a harsh truth about the world in which we live:  we stare at those who do not conform to our preconceived notions of beauty, and we do so with a mixture of fascination and disgust, as though they were below us simply because of their appearance. Even as obesity is proclaimed a dangerous epidemic, it's done so by the very same media that distorts our notions of beauty and forces us to evaluate one another (and ourselves) based on a ridiculous criteria, and we cannot help but cast long, unashamed glances at those who look like Davis, as though they had arrived from somewhere strange and alien to our own world--outsiders deserving of our scrutiny and criticism. But by taking photographs that focus exclusively on her weight, we the viewer are forced to confront this aspect of our collective selves, as Davis' photographs invite us to stare, if not outright demand it. This changes the dynamic of power in the relationship between those who stare and those who are stared at--between the viewer and the viewed--and in this way Davis can manipulate us through her photography and lead us away from our blind prejudice, if only slightly.

Photographs are, at their very heart, windows that transform all observers into voyeurs, as Wilkes Tucker notes. Every photograph is a peek into somewhere new and foreign, whether it be the sweeping ridges of a mountain range, a wide-angle portrait of a bustling city street, or the dimly-lit kitchen of a single young woman's apartment. And we are allowed to peer in without interruption and for as long as we want, all without the possibility of being discovered by those whom we watch. It is an invitation to gawk, and yet, when presented with photographs of Davis, we suddenly cannot. It is not disgust this time but shame--shame for ourselves, for knowing that we can indulge in the very same voyeuristic fascination that consumes us on sidewalks or in the aisles of a supermarket without fear of being sighted, but our conscience won't allow us to. Suddenly, confronted by one of these women--one of the objects of our self-righteous inspections--we are forced to also confront this "object's" humanity, her isolation, her sadness. Of all the photographs in her book, taken over eleven long years, not a single one depicts her smiling in any way, even when wrapped in the arms of another person. In seeing Davis for the who of her being rather than the what of her body, we exorcise the distance we have placed between her and us--the alienness that we bestowed upon her with an almost violent defensiveness--and in doing so we acknowledge what we have in common rather than what separates us.

In an interview a few years ago, Davis remarked that her work "is ultimately about our discomfort with our Self." Note the use of capitalization and spacing--not discomfort with "ourselves" but our being, the person we are, the ways we define and see our own body and mind. In being given approval to look at Davis in all forms--clothed, naked, alone, coupled, in light and in darkness--we are forced to understand that photographs like these could just as easily be taken of us. Because when we mock and stare, we do so in subconscious self-defense against the very mirrors we refuse to turn and look into, for fear of what we might see...for fear of how those reflections will not match the image we have of ourselves. By turning the camera on herself--for hours upon hours, for eleven years--Davis refused to ignore the mirrors any longer and confronted the difference between the fantasy of herself and the reality of who she was. "Was" in past tense because the reflection changed her. "Was" because the woman we see in these photographs is not Jen Davis anymore. "Was" because the image and the photograph have been reconciled into one slowly developing single truth. "Was" because the person we saw was never actually that person to begin with.