There's a chapter in What If?2:  Additional Serious Scientific Answers to Absurd Hypothetical Questions, in which author Randall Munroe, a former roboticist for NASA, addresses the following question, submitted to his blog by a reader:

At what point in human history were there too many (English) books to be able to read them all in one lifetime?

Through a variety of calculations, many of which are based on our understanding of human productivity, Munroe concludes that a person's ability to read all available English texts ended "sometime in the late 1500s." This corresponds to the Elizabethan era, in which Shakespeare and Marlowe were writing some of the most foundational works in English literature.

And while this makes sense--Gutenberg's printing press had been in existence for over a century at this point--it is also difficult to accept.

To a lesser extent, Munroe's conclusion is a reminder that only a small fraction of the literature from Shakespeare's era has survived, including some of the Bard's own work. Our understanding of "literature" in those decades are formed from what survives; we read the works of Shakespeare, Marlowe, and their contemporaries, and we extrapolate outwards.

But more importantly, it is a reminder that we live in an unprecedented era for readers. Thanks to apps like Libby and Kindle, which allow people to read books anywhere; sites like Google Books and the Internet Archive, which have digitized millions of texts, including rare and out-of-print works; a gargantuan self-publishing industry; fanfic sites; and a proliferation of audiobook services, like Audible and Libro.fm, it has never been easier to find, purchase, and read books. (Having grown up in a small rural town in the 1990s, the change over the last three decades has been staggering:  back then, our two greatest resources for books were public libraries--the nearest of which was ten miles from our home--and a shopping mall Waldenbooks, which was 20 miles from our home.)

This overabundance of reading material is undoubtedly positive:  independent bookstores are undergoing a massive resurgence in popularity and support, readers are able to find a wealth of materials in even the most niche of sub-genres, stories have become more diverse and inclusive, and so on. But wealth of any kind leads to problems of its own. In this case, the age-old problem of being unable to read as much as one might want.

This problem--if it can be called such--rears its head most notably on social media, where dedicated readers post messages of distress:  "How," they ask, "will I ever read every book that I want to read?" They bemoan the size of their TBR piles, which never seem to shrink, as if the simple task of reading has led each of us into a Borgesian library of our own making--a world in which the stack of books at our bedsides will never get smaller, no matter how much time we dedicate to reading those books. 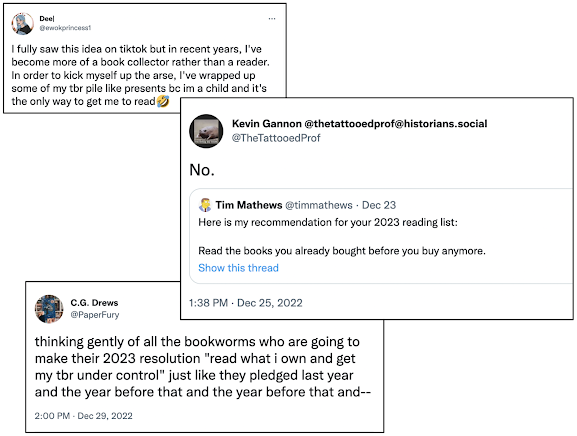 Note the subtle difference between this problem and the question posed to Randall Munroe. The issue today is not that someone might want to read every work published in their mother tongue. Instead, it's that someone may have a carefully curated collection of books that they want to read, perhaps desperately so, but will be unable to before shuffling off this mortal coil.

Or, to put it more succinctly:  We will die before reading every book we want to read, and we cannot accept it.

Earlier this year, in a fit of curiosity, I created a spreadsheet listing every book I own. Most of these are kept in bookshelves scatted throughout my apartment, though a sizable number are in plastic bins in my garage, moved there due to lack of space. (For the sake of simplicity--and to preserve my own sanity--I didn't list the hundreds of books in my classroom library. Yes, I own those books, and yes, I've read many of them, but I purchased them for my students, not myself.)

As of this writing, there are 764 titles in my collection, and they run the gamut of subjects and genres. There are biographies and works of history alongside novels, plays, and poetry collections. Fantasy, science fiction, horror, and mystery abound, as do oral histories, works of mythology, graphic novels, anthologies, and photography collections. There are books published by long-standing and much-revered companies alongside those published by independent presses, by museums and historical societies, and by the authors themselves. And there are the oddities, too:  William T. Vollmann's seven-volume study of violence, published by McSweeney's, of which I've read only the first slim volume; the collected records of a 19th century fur company; a scientific encyclopedia from the 1950s that spans more than 2,000 illustrated pages, which was a gift from an aunt; a two-volume collection of wildlife photographs by George Shiras, who was active in the early 1900s; and the massive diary of Arthur Inman, a recluse driven to suicide by noise from a construction site, among others.

And while I'm constantly weeding my collection for unwanted books, either donating them to local library sales or turning them in for credit at independent bookstores, the one constant is that I have never read the vast majority of the books I own. In fact, as part of my self-audit, I decided to count the number of books in my personal library that I've actually read. The result? Out of 764 books, I've read 167, or just under 22%.

Which would not be worth mentioning, except that I continue buying books at breakneck speed. Those new books, heaped alongside my desk, will be added to the spreadsheet, placed on a bookshelf (or possibly in a bin), and--if history is any indication--almost certainly ignored for years to come.

I've accepted that I will never stop buying books, even if it means they gather dust on a bookshelf, suffer the changing temperatures of a detached garage, or go unread. They are here in case I ever get around to them, which is a small--but important--comfort for someone who loves reading.

That is to say, they were not books I was planning to read, or would ever purchase for myself. Books that I buy and keep in my apartment are books I want to read:  I come across them in bookstores or library sales, I hear about them online or from other readers, and I buy them because they peak my interest.

But a majority of the books I read this year? They were from libraries, first and foremost, rather than from my own collection. What's more, they were read out of convenience--I needed something short and quick, for example, and grabbed whatever I found on a library shelf--or out of obligation, having read and enjoyed the author's previous works. Sometimes they were read on the recommendation of others. And sometimes I read books based on reputation, either of the author or the prose itself. (In a moment of pure dumb luck, I read Annie Ernaux's masterwork Happening a month before she won the Nobel Prize for Literature.) During the school year, when reading time is scarce and fleeting, I rely on graphic novels--slim volumes with very little text, which can be set down at a moment's notice and just as quickly picked back up. During the summer, when my schedule is more open, I tackle lengthy tomes that require extraordinary time and focus--the next volume in Robert Caro's biography of Lyndon Johnson, perhaps.

The numbers don't lie. Of the 102 books I read this year, I count 12 that I was earnestly excited to read. This isn't the typical excitement you feel when starting a new book. Instead, this is the excitement a child feels for presents under the Christmas tree:  that nervous, ticklish anticipation of knowing something good is coming your way, that it's something you want and will thoroughly enjoy, if only you're patient for just a little longer. This is the same excitement you feel when you pre-order a book in January, knowing it won't be coming out until March or July or September. It's a feeling that only intensifies as the months pass.

Here are the 12 books I was genuinely excited to read this year:

These are books I had wanted to read--had been meaning to read, had been excited to read--for some time. In a few cases, these are books that had sat on my shelves for a while. In one or two other instances, they were books I purchased as soon as they were published, and devoured in one or two long, delirious evenings.
I realize this sounds selfish and close-minded. After all, the joy of reading often comes from discovery--plunging into a book without knowing too much about it. And that's true. Looking over my list of books from this year, I see at least six that were random selections--out of reputation, obligation, or convenience--and were some of my favorites:
But what I'm focusing on next year is returning to purposeful reading--the idea that I should be reading books that nurture my love of storytelling--rather than reading a book for the sake of reading something, anything.
In other words, a focus on quality over quantity.
Too often, especially at the end of one year and start of the next, readers set a goal based on numbers. They want to read a set amount of books or pages, rather than wanting to read books they will enjoy, regardless of the number. This is the pattern I've slipped into, and it's resulted in me reading more books every year, but enjoying very few of them.
Even now, casting a glance over the unread books on my shelves, I see at least a dozen or so that I am desperate to read:  Blood in the Water by Heather Ann Thompson, Love by Toni Morrison, Secondhand Time by Svetlana Alexievich, The Dog of the South by Charles Portis, Becoming Abolitionists by Danica Purcell, Let the Record Show by Sarah Schulman, The Inconvenient Indian by Thomas King, An African in Greenland by Tété-Michel Kpomassie, The Overstory by Richard Powers, The Known World by Edward P. Jones, The Yellow House by Sarah M. Broom, Solitary by Albert Woodfox, and so on. All have sat on my shelves for months, if not years, purchased in a fit of unparalleled excitement and just as quickly forsaken in exchange for books that were short, easy, and convenient.
Unlike most of the books I read during the year, these particular books take time. They require something more from me than I have been able to offer so far. And I can set the blame in a dozen different places--my job, the volunteer work I do, the commitments I've made to coworkers, friends, and family--but that is relying on excuses. I have the time and ability. I simply need to shed my fixation on reading a certain number of books by this time next year.
I need to focus on the books I want, rather than the books I think I want, or that other people tell me I want.
Because, as we all know, time is fleeting and fickle:  one minute you're young and have a seemingly endless amount of time, and the next, you're sitting amongst a horde of books, your aching hands and tired eyes suddenly unsure of task in front of you. Unsure if you'll ever be able to devour those books you spent years gathering for this very moment. 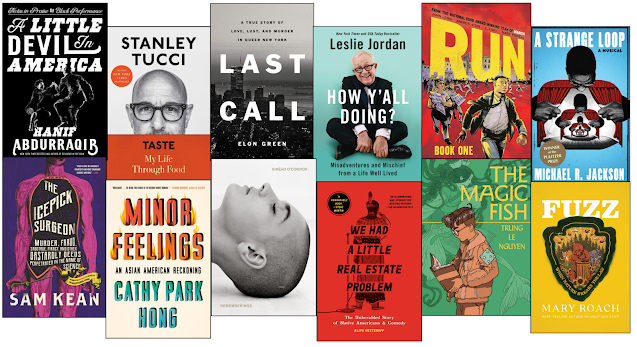 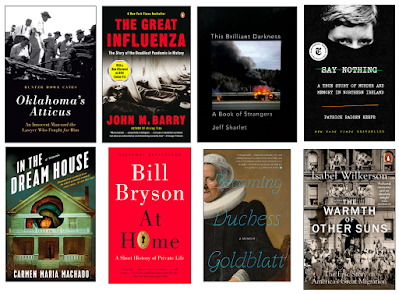 *indicates a reread
titles in bold were favorites