Magic ("The Kings and Queens of Roam" by Daniel Wallace) 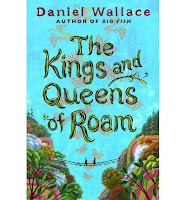 During the five years I spent in college, I was so bogged down by research and distorted by literary analysis that I only read one book for pleasure: 100 Years of Solitude by Gabriel Garcia Marquez. It took me three months to read...three long, glorious months, during which I absorbed every word as best I could. Each page was its own separate novel, each paragraph its own story, as though Marquez weren't just writing about the Buendia family or the little town of Macondo, but a history of everything that ever was or would be:  love, birth, death, corruption, perseverance, illness, strength, joy, war, peace, success, failure. The world was in that book, something I recognized from the very first line, and I lived in that world every day on the third floor of my campus library. For almost an entire semester, that book was my education; the rest was just distraction.

Marquez remains the master of magical realism--that blend of the actual and the fantastical--and very few writers have managed to strike that same balance with the same skill and effect. (In truth, it would be foolish to try.) Daniel Wallace is one of the few writers today--and perhaps one of the only American writers--who embraces the magical and fantastic and their influence on the real with the same clarity as Marquez, even if he's destined to stand forever in his predecessor's shadow. Big Fish, Wallace's first novel, concerned a son whose only window into the life of his dying father is the old man's repertoire of strange, unbelievable stories--of a giant named Karl, of a town where the people are kept from leaving by a Cerberus-like dog, of a massive snowfall that buries houses up to the roof, of war and snakes and big, uncatchable fish. By the end of the novel, the stories William Bloom so long dismissed as ridiculous become the stories he himself tells about his father--a moment when the fantastic and the real become one in the same.

Now, fifteen years after the publication of Big Fish comes The Kings and Queens of Roam. Set in a strange, secluded area of the American wild--an area filled with ravines, bears, wild dogs, thieving vines, and sudden downpours--the story concerns the residents of Roam, specifically two sisters, as the town slips into ruin decades after its silk factory--the only foundation of its economy--has stopped producing. The younger sister, Helen, is beautiful and blind, while the older sister, Rachel, is ugly and sighted; Rachel is also vindictive towards Helen, who relies on her for information about the world beyond her almost sightless eyes, and in a moment of selfishness, Rachel "switches their faces" with a sudden, vicious lie. Suddenly, Helen thinks of herself as hideous and her sister as the epitome of beauty; when the townspeople compliment her on her looks, Rachel tells Helen, they are lying out of pity. It is a momentary burst of anger and resentment that Rachel doesn't understand, even as it's happening--one due in part to the sudden deaths of both parents in a car accident some time before and in part because of Rachel's constant need to take care of Hannah--but it causes Rachel to run from home and forces Hannah to examine just how deep her ugliness goes.

Interspersed with the story of Hannah and Rachel are other stories of the Roam's residents, both past and present. We learn how the small village was founded--the kidnapping of a Chinese silk-grower by an American man--and how their partnership in business eventually became a friendship that was, much like the sisters', based on little more than selfishness and anger. There is Smith, the massive lumberjack who lives only for his dogs and never speaks; Digby, a waist-high bartender whose tavern is populated by the ghosts of dead citizens waiting for a home to open up in town; and Dr. Beadles, an aging man who finds the cure of all ailments in the water of a hidden river. Each story on its own is a fascinating look at how Wallace crafts characters who are unique individuals on their own but come together to create a foundation for the central themes of loneliness, love, and forgiveness. It's these characters and themes that come together in the novel's closing moments and, beautifully, resolve not only the resentment felt between both sisters but also the entire tortured history of Roam.

While Wallace is no Marquez--and has never claimed to be--he is clearly indebted to the Venezuelan Nobel Prize-winner nonetheless. Just like Marquez's most famous novel, Wallace's newest is populated by contrasts:  the giant lumberjack alongside the "not-a-midget" bartender; the young Hannah meeting the super-centenarian Chinese silk-spinner and kidnap victim; a city of the living now increasingly populated by the dead; Hannah's internal and external beauty alongside Rachel's internal and external ugliness; and so on. Wallace also allows all of these contrasts and extremes to exist without undue attention. That ghosts should not only haunt Roam but speak to the living, sit in a bar, and look for available real estate would normally be the focus of the author's distracting need to explain away every implausibility; for Wallace, it's little more than a natural part of this world, and it adds to what would otherwise be a basic story of family arguments and personal discovery.

In fact, it's these elements--the fabulous and the normal so wonderfully mingled together--that are the heart of the story. Yes, the relationship between Helen and Rachel dominates the novel, as it should, but each character hides a depth behind their hyperbolic facades that is its own rich story. Their heartbreaks--of wanting to love and be loved, of wanting to be more than just survivors in a literal ghost town--normalize them in a way that no physical description ever could. That their town should be called Roam--named for the two founders' sojourn there, though perhaps also an ironic nod to the historical empire--is telling. Not a single character who lives in Roam appears happy until they are joined with someone or something else:  a quiet tree-feller and his dog, a ghost and his house, or a short bartender and a woman who loves him. Or even two sisters, one beautiful and one ugly. Their reality is one of loneliness, and it's only by searching--by roaming--that they find their own personal magic.
Posted by Adam at 4:22 AM