Aliens ("The Humans" by Matt Haig)

If science fiction has taught us anything, it's that the arrival of alien life--in whatever form--will spell certain doom for our species, if not the planet as a whole. The last decade alone has seen films in which alien visitors engage in battle with the American Navy (Battleship), incinerate cattle (Cowboys & Aliens), abduct parents (Mars Needs Moms), endanger teenagers (I Am Number Four),  and just basically destroy anything in their path (Battle: Los Angeles, Transformers, Cloverfield, Attack the Block, etc.). There are exceptions, of course--E.T. and Close Encounters of the Third Kind, both by Steven Spielberg, are two that come to mind--but the vast majority of these films, as well as most science fiction literature and one infamous radio broadcast, see no benefit for our species in the arrival of extra-terrestrial beings.

Which is ironic, since a search for "films featuring extraterrestrials" reveals that the earliest movie depicting alien life is Georges Melies' 1902 short "A Trip to the Moon," in which men from Earth ride a rocket into the moon's eye in order to explore our planet's lone satellite. 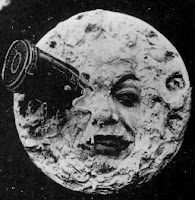 And while Melies' film does include what would we consider alien life--in this case, ugly insectoids called Selenites--they are aliens only to us as the viewers. In reality, the astronomers who've landed on the moon are the extraterrestrials, having violently crashed their ship on a world that is not their own and almost immediately engaged in a war with the native population, of which they kill quite a few before returning to Earth. It's strange to think that this one film--12 minutes long, silent, French, black and white, made over a century ago, the predecessor to almost every film ever made--laid the foundation for science fiction, a genre populated by violent interstellar war and apocalyptic invasions, by casting human beings as the dangerous, destructive aliens.*

It's this idea--human beings as aliens--that lies at the heart of Matt Haig's The Humans, a novel that starts off with a humorous bend but becomes, over the course of almost 300 pages, a deeply touching and wise exploration about what it means to be one person living among seven billion other people. And it all happens through the eyes of an alien assassin living in the body of Andrew Martin, a British professor and mathematician who also happens to be an unfaithful husband, distant father, and overall miserable human being.

For the first dozen or so chapters, The Humans is little more than a series of observations befitting the most basic of stand-up comedians, all related to the mistakes, eccentricities, and contradictions that are--in his mind--inherent to humans. We are slow. We are stupid. We lack the ability to understand ourselves, not to mention the world around us. Our priorities, as expressed by the nightly news, are misguided and selfish. The food we eat is tasteless. What we consider beautiful the newly possessed Andrew Martin finds average, even hideous. We focus too much on clothing. (The alien Andrew Martin spends the first few chapters naked.) And we think of ourselves as clever, perhaps even the most intelligent creatures on the entire planet, when Martin knows  for a fact that we are one of the least intelligent creatures in the entire universe, living on our small blue rock in a secluded, forgettable corner of all space and time. Our math, science, and physics are light years behind the knowledge of his people, and the most basic pillars of who we are--birth, parents, war, love, death--exist in entirely different forms on his world, if they even exist at all.

As the story progresses, Andrew Marin the alien slowly gives way to Andrew Martin the man. Sent to eliminate all those with knowledge of the dead professor's work on an infamous theory, the alien begins to understand humans more clearly through his interactions with wife Isobel and teenage son Gulliver--two people who've lived in virtual isolation while Andrew the man disappeared into his work, obsessed, for much of the last two decades. And as he does, he finds his primary objective more and more impossible to carry out; not only do Isobel and Gulliver deserve to live--they know or care very little about his work--but they defy his expectations and reveal themselves to be loving, compassionate, complex, and ultimately lost figures in the life of a man who had little desire to find them. He discovers a long-abandoned novel written by Isobel and encourages her to consider publishing it. He encourages Gulliver, who is bullied because of his father's prominence (and his alien-father's unabashed nakedness around town), to fight his main antagonist in a public park. He cures the family dog's ailments and, together, they discover a love of peanut butter and Claude Debussy. He works to rebuild the man he now is, not because he has to--he could end his mission at any time--but because he wants to, first out of curiosity, then out of a strange new sense of loyalty to the people he now knows and even loves.

Towards the end of the novel, after Martin has faced down quite a few of his own antagonists, including mistakes made by the man he used to be that continue to haunt his family, he creates a list of 97 pieces of advice "for a human." He types out the list quickly, and he leaves it to be found by the one person who knows his secret more than anyone else--in fact, he's the one person who not only changes Martin the most but is changed by Martin the most--and contains as much knowledge as could be learned by one alien over the course of such a short span of time. And while some of the advice is cliched, especially to those readers who live in a world filled with words-of-wisdom memes, others have their own special significance, not just to the novel, but to the world beyond it. Reprinting all 97 would be sacrilegious to the author--it's worth reading the book just to get to the list itself, though even without it the book would still be an excellent read--but my favorite, and perhaps the most relevant to the story, is Number 73:  "No one will understand you. It is not, ultimately, that important. What is important is that you understand you."

Over one hundred years ago, Georges Melies depicted a group of astronomers launching themselves to the moon to...what? To explore? To understand space? To gain notoriety for themselves? To be daredevils? It's never really made clear why, six decades before man could actually land on the moon, Melies' characters felt the need to go there. However, if they did make their voyage in the interest of scientific discovery and understanding, they did a piss-poor job of it. They damaged the moon's anthropomorphic face, killed as many of its inhabitants as they could, and did very little to advance science. In fact, in the film's first scene, when the very idea of a voyage to the moon is proposed--by an old man at a chalkboard, a man in some ways like Andrew Martin--his idea is met with outrage and disbelief. Fists are raised, shouts fill the observatory, and the frustrated elder throws his papers at the others in frustration. His idea--his dream--has been met with defiance on the part of those who should understand. And that's the flaw in us, according to Haig's alien:  we spend so little time understand ourselves and who we are that we stop, abandon our dreams, and become what we think we should be. The family our narrator finds himself a part of is one in which Isobel, thinking she had to abandon her work for her husband and son, gave up on her novel; one in which Andrew and Isobel, thinking they had to mold their son to fit their own idea of how he should act, pushed him away and force him from his dreams; and one in which Gulliver, under pressure from--and because of--his parents, feels that his only way to escape is to escape in the worst way possible. Each member of this family is an alien unto themselves, unwilling to understand themselves because they are misunderstood by those around them.

In one of the novel's less heartfelt moments, Andrew and one of his few pre-alien friends, Ari, engage in a discussion about how an actual alien might exist on Earth. Ari maintains a belief in extraterrestrial life, without a doubt, saying that aliens smart enough to arrive at earth would also be smart enough to disguise themselves well, and adds that human beings resist the idea because "then we'll have to know, once and for all, that there is nothing really unique or special about us...." (155) It's a throwaway line, delivered at a cafe towards the end of a profane rant about science and history, but it's a telling line, too--the idea that we are so involved in being some bigger version of who we really are that we don't realize we're living in a world filled with the same. We are aliens in our own skin living among other aliens. Andrew Martin is the literal example, but in the world of Haig's novel--ostensibly our world--there are seven billion metaphoric examples, too.


*A link to Melies' film, undoubtedly one of the most important films every made by one of cinema's most important people:  http://www.youtube.com/watch?v=_FrdVdKlxUk
Posted by Adam at 11:41 AM