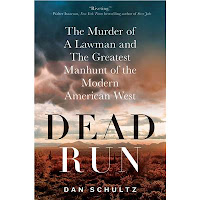 a. a horse that cannot be broken; a mean, intractable horse.


Dead Run, Dan Schultz's account of the Four Corners manhunt, which began in 1998 with the execution of an Arizona police officer named Dale Claxton and escalated into a fruitless ten-year search over hundreds of square miles, is really three books in one. At its heart is the forementioned manhunt, which involved not just multiple police precincts and Native American tribes but state agencies and even the FBI, all to capture three anti-government survivalists who stockpiled automatic and semi-automatic weapons in caches that, to this day, lie hidden throughout the American southwest. The manhunt, which should have ended after only a few hours, instead became an ongoing source of embarrassment and frustration to those involved, as inter-department conflicts, issues of overlapping control between sheriffs, and an overall unpreparedness brought the investigation to such a startling halt that the men were never captured alive.

The second story is one of geography and myth--namely, how that unique portion of the country, where four states come together in perfect right angles amid sweeping deserts, plunging canyons, and rolling hills, can make men into something more. This is, after all, the land of Wyatt Earp, Bat Masterson, and Butch Cassidy and the Sundance Kid; this area of the country was borne on the sweat of cowboys and cattlemen, nurtured on the muscle of lawmen, and survives to this day on the blood of the rugged, rebellious individual. But where some find solace in the empty, lonesome expanse of desert--they live among their cattle, their few scant neighbors, and the sky, more than happy to be untroubled--others find refuge from influences they see as omnipotent, intrusive, and dangerous...namely, authority figures like local police, park rangers, and the federal government. This is an area where conspiracy theories have a greater foothold compared to almost anywhere else in the country, where outsiders in nice suits and locals in uniforms are viewed with a suspicion often tinged by paranoia and anger, and where many of these same people are surrounded by the very presence they abhor--wide swathes of federally-owned or federally-protected land. This mix--of the law and lawless--is what leads to the occasional explosion of violence like the one at the center of Schultz's book.

For the first half of Dead Run, Schultz jumps between these two stories, balancing their dichotomous subjects and evocations with ease; one chapter waxes prophetic on the romanticism of the southwest with flowery language and hollow cliches that run on endlessly, while the next chapter recounts in detached, reportorial detail how the three men went about executing Claxton after hijacking a water truck. It makes for an interesting if not disquieting read, one that promises depths of information and learned analysis. It's the third portion of Dead Run, however, that is problematic. Every so often, but increasingly as the book moves towards its close, Schultz interrupts details of the manhunt itself to offer hypotheses about how each of the three outlaws met their end--the police believed each committed suicide, while some of the officials who participated in the search aren't so sure--as well as hypotheses about whether there were more than just those three. On the surface, this seems expected--after all, with no police interrogations or journals from the fugitives to speak of, Schultz must speculate as to motives and the details of their long escape with what few details he has. But Schultz's speculations go beyond fact-based at times and, in rendering a hypothesis based on the details available, shows his hand: he doesn't believe in the suicides of at least two of the men, and the third he leaves open for debate, which makes his attempts at seeming unbiased all the more painful. (In one instance, Schultz constructs an entire, multi-page hypothetical scenario involving a "commando" who murders one of the fugitives. For the longest time, I was unsure whether Schultz intended this "commando" to be seen as one of the other fugitives or a law-enforcement official.)

Despite these missteps, Schultz does a service to the reader--and to those involved--by emphasizing how the resolution that should come with a closed case has not actually been achieved in this case. Yes, it may give comfort to the victims and communities to know the three men are dead, regardless of cause, but it doesn't give due diligence to history. Outlaws committing suicide in desperation is different than outlaws killing one another to save themselves, and both of those scenarios are much different than if they were killed by an officer, agent, or self-appointed executioner. As unsavory as the details may be, they're relevant to not only understand the men themselves--what drove them, what kept them on the run, how they survived, how their lives ended--but how an incident like this can be prevented from ever happening again. Men like those who committed the crime rely on conspiratorial groupthink to support their own paranoid delusions--beliefs nurtured by mishandled cases just like this one--and it does little good to give them yet another instance of those in power with something to hide, something more to tell that goes unexplored and untold, and it feeds the monsters of our society who, living for years in their lonely caves, decide to wander out one day and terrorize others. By refusing to resolve this case once and for all, the legacy of this tragedy becomes one of incompetence rather than one of mourning and resolve; in essence, we yield our history to the monsters.