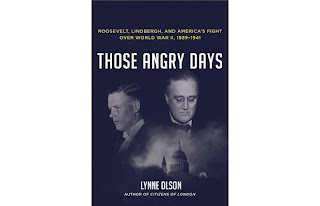 One of the most frustrating points that is made about our current social and political climate is that it's never been this bad. When we talk about our elected officials, regardless of party affiliation, we bemoan the state of our government, their lack of empathy and shared sacrifice, their detachment and utter inability to accomplish anything substantial or beneficial. We demand civility and compromise, we demand clear ideas, and above all else we demand "conversation" over arguments and deadlocks--we want those in positions of power to discuss, share, and come away more informed. And then, to validate this belief, we turn to organizations and institutions that promote just the opposite: cable news channels that feed into our own ideologies so we're imbued with a sense of self-righteousness, a belief that our side is right and the other side is wrong, and it's on these cable-news shows that we see those very same politicians--the men and women we claim to abhor--lecturing The Other Side about proper behavior and the need to personify those very virtues they themselves refuse to embrace. It's a strange, maddening, and almost Orwellian cycle that feeds itself like a creature devouring its own offspring.

But it's not new.

When people say our current situation is worse than any other time in our nation's history, even the not-so-distant past of our fathers and grandfathers, they're presenting themselves as ignorant and foolishly idealistic. Anyone with an understanding of American history that goes beyond their high-school textbooks recognizes how prevalent and enduring these themes are throughout our centuries-long history. There has always been legislative inaction, conflict, arguments, and a lack of leadership when it comes to making our country a better, safer, stronger place; there have always been rotten and corrupt politicians wielding ridiculous amounts of power, talking heads espousing vitriol against those whose ideologies--or ethnicities--differ from their own, and the masses--unsure, angry, afraid--who are bribed and manipulated to pick one side or the other.

Case in point: the lead-up to World War II. Even today, we recognize the complexities and difficulties inherent in how we as a nation approached a war that, for many citizens, was not ours to wage until Pearl Harbor. We understood the evils of Hitler and the Nazis, even before we knew the full extent of his genocide, and in doing so we also understood the commitment it would take--in time, in money, in bodies--to defeat him. He waged his war in part because of the Versailles Treaty's retributive inequities, of which we shared the blame, but we could also step back and claim innocence; after all, we were not his neighbor, and he was not antagonizing us. We understood that much of his power was derived through scapegoating and fear, primarily of those minorities within Germany borders who did not have the numbers or influence to defend themselves, while also knowing many of our citizens--an unhealthy swathe of our own population, we must admit--held some of those very same repugnant views.

It's this division as a nation and a people that lies at the heart of Lynne Olson's Those Angry Days, which chronicles the build-up to America's involvement in World War II. Ostensibly an account of the conflict between Franklin Roosevelt and aviator-turned-isolationist Charles Lindbergh, as the subtitle describes, Olson's book is actually the story of our divisions as a nation--a look at how our country was split on what to do about a war we didn't want any part of. And while Olson casts the wildly popular (and deeply communicative) Roosevelt and the wildly popular (but deeply reserved) Lindbergh as representatives of the two sides, both men are little more than supporting players who only meet once, and to no effect. Roosevelt is portrayed as little more than a sabre-rattler whose words do not translate to action, and Lindbergh is far from an isolationist leader, spending much of the story--set in the late 1930s and early 1940s--with his wife and children away from the public eye. When he does engage in politics, which occurs more and more in the book's second half, it's to give anti-war speeches that are increasingly anti-Semitic in nature. But even with his widespread fame, Lindbergh does more to damage the isolationist movement than further its ultimately fruitless agenda.

A more appropriate subject would have been the relationship between Roosevelt and Senator Burton Wheeler, who was Congress' most ardent and vocal isolationists...and a much greater (and more powerful) foe to Roosevelt than Lindbergh was, as he could actually propose--or, in most cases, stall--legislation related to the war. Or perhaps a better focus would have been the relationship between Lindbergh and Interior Secretary Harold Ickes, a progressive whose dogged pursuit of the aviator borders on obsession by the book's closing chapter; it was Ickes who led the White House's attacks on Lindbergh, not Roosevelt. Or even between Roosevelt's Republican opponent in 1940, Wendell Willkie, and the Republican Party itself, which threatened to implode over their own divisions--those who supported isolation against those who supported intervention--and ultimately fought this fight in Willkie's candidacy. By the end of the book, Willkie is one of the few public figures, other than Secretary of War Henry Stimson, who comes out of the entire pre-war debacle looking better than he did going in. (Willkie becomes one of those party-bucking, country-before-career politicians people today desperately yearn for, even though he himself gives in to election-year pressures and would not have even survived his own first term had he been elected.)

I'm willing to forgive Olson--or her publisher, or both--for framing the nearly 500 pages of this book as a fight between two men, one a president and the other an aviator, even if the men are more stand-ins than actually page-to-page adversaries; after all, it's the subtitle's promise that actually lured me in in the first place, and I'm far from disappointed in the book. And Olson actually does good by her subjects, including Lindbergh, whose repellent speeches are put into context when related to the man and his inability to process or predict the feelings of those around him; no one leaves this book a boogeyman, and all public figures, including those who are only given a brief mention here or there, are given some depth. (Ickes and Wheeler, undoubtedly the book's two most dichotomous figures, are also its most interesting and, surprisingly, the most fun to read about.) But there's so much to write about here, and so much more to learn, that even if Olson had doubled the size of this book and devoted novel-length portions to all of the divisions and conflicts mentioned within--big and small, national and parochial, enduring and passing--it still would still not have been as satisfying as promised by the subject matter. We know, living as we are now through an era of immense disagreement and change, that conflicts can tell us more about ourselves and our country than anything else, and that great conflicts and great history are often intertwined. And it's that quest--to know more about ourselves and where we came from, who we were then and are now, and how this can make us better people--that is the heart of American history, even when it's the sides of our past we'd rather excuse or forget.