The Past ("Colorless Tsukuru Tazaki and His Years of Pilgrimage" by Haruki Murakami; Philip Gabriel, trans.) 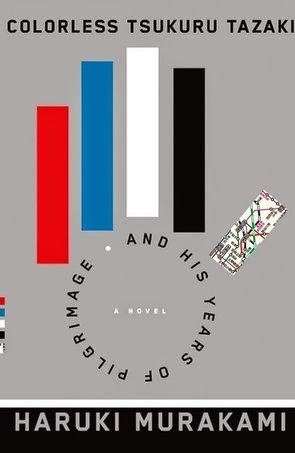 2014 marked ten years since I graduated from high school--a small, some would say meaningless milestone that is typically accompanied by a reunion of some sort. In my case, the invitation arrived a few weeks into August, after some dedicated outreach on the part of a former classmate. She organized a modest get-together in a community park less than a mile from our old high school, nothing too demanding, and attending would have been easy--after all, I only live 90 minutes away and have weekends free. Nevertheless, I didn't go, and I don't plan on attending any reunions in the future, either. This decision had nothing to do with the quality of my high school, which I enjoyed overall, nor an attitude about my former classmates; instead, my decision has everything to do with the person I used to be and how that version of myself doesn't exist anymore.

Yes, we all change after high school, but most people change linearly:  they become the person they were already becoming, moving every further down a straight line while leaving behind those aspects of themselves that they outgrow. There are those rare few, however, who change in substance rather than style or amplitude. (To be more metaphorical about it, most of us change the hues of their self-portrait, deepening some colors and lightening others, while a few simply paint over the entire canvass with something completely new. I would fall into this latter category.) The high-school version of myself was a different creature altogether, a character constructed Frankenstein-like to mask--or personify, I've never been sure which--the toxic punch of sadness, self-loathing, anger, confusion, and desperate clawing jealousy that fueled my teenage years. Not that I was miserable by any stretch of the imagination, or that the tempestuous emotions raging inside of me were any worse than those experienced by my classmates, but the relationships I built were always shallow and one-sided, and to this day I'm only in regular contact with two or three people from that time in my life. This was not an instance of people "drifting apart," as the cliche goes; this was an example of people leaving the theatre after a four-year performance unaware that one of the actors had joined them in the streets, having been too consumed by himself to care about anyone sitting in the audience beyond their occasional applause.

While every teenager is different, I was different in more than just the usual ways--permanently, undeniably different--and it would take me another few years to fully understand and accept those differences...and only then, in my early 20s, could I actually begin to work on myself in the same way most of my classmates had years before. They'd had guides to help them, people who had been through many of the same experiences and could lend their wisdom or point my classmates in the right directions. And while I was blessed with fantastic parents and excellent teachers, none of them could offer me a guiding hand because none of them had faced down the long stretch of asphalt that had been steamrolled out in front of me. And I was too afraid--too ashamed, too mistrusting--to ask for a pair of shoes before setting my feet on the boiling tar and beginning my walk. Looking back, and knowing what I know now, it's easy to blame myself for being fearful of something that was terrifying only because I decided that it was, because I didn't think I was strong enough or mature enough to handle it. In the moment, however, life's obstacles can seem insurmountable.

And so, to hide the fact that I was different--an appalling possibility in such a small, conservative, rural town--I both embraced and denied my otherness in the same breath, transforming me into a walking Jekyll forever caught in mid-transformation. It was a strange identity to embrace, one I still don't fully understand, but the distance I gained after graduation--from my small town, my peers, the public image I'd manufactured for myself--allowed me to step away and become a better, more self-aware person. It also allowed me to see just how vacuous and unappealing my former self had been; even though I can claim to have been liked, it was for the wrong reasons. My friendships only existed for my own benefit, and when they couldn't offer me anything else, the friendships faded into nonexistence. Other friendships were nurtured on negativity and gossip, which was less about friendship and more about making ourselves feel better by criticizing others. And the sarcastic sense of humor I developed early on was deployed to defuse any serious situation or push away those who might disrupt the character I'd made for myself. To meet up again with anyone who knew me back then would have forced me to resurrect that character in memory, if only briefly, which would mean having to reconcile the two all over again--an activity I have no interest in repeating, even to explain away my past or the person I now am. I'm more comfortable letting that past identity continue fading into history, kept alive by little more than yearbook notes to my classmates that, ten years later, mean very little out of context.

At the same time I was sending contact information to the president of my graduating class, all for an invitation I had no intention of opening, Haruki Murakami's awkwardly-named Colorless Tsukuru Tazaki and His Years of Pilgrimage found its way into my hands. I read the entire book in two days, devouring a story that seemed destined for intrigue and suspense--an unexplained death from the past, former friends who suddenly abandoned the protagonist and, years later, are just as shadowy and evasive as before--but ended somewhere nuanced and profound, far from the choking cityscapes of Murakami's native Japan and his penchant for unique and bizarre situations. The novel's closing chapter, where our protagonist finally gets a sense of closure over his past, is tender and moving, filled with supporting characters who defy every cliche you expect Murakami to throw our way. Compared to the novel's opening pages, which are clunky and seem to embody the author's need for professional direction--an awkwardness that seems to embody what it's like to be actually be a teenager--the closing moments leave you with a sense of understanding, something you very rarely have when you look back on your past in search of clarity.

All of the cliches associated with reunions--with meeting people you knew in your younger and more vulnerable years, as Nick says in the opening lines of The Great Gatsby--assert that we'll revert at once to our past selves. The sarcastic outcast will still be the sarcastic outcast, the star athlete and his girlfriend will have gotten married, the bookworm will be making six figures in an impressive start-up company, and past relationships will be awkwardly rekindled over tasteless drinks and food. That is the nature of cliches, after all. But the reality is different. We come back as changed people, though the degree of our personal transformations are varied, and often we come back because there's something left unanswered, like in Murakami's novel. But rarely does the past hold a key to helping us understand ourselves. We have to find the answers to those questions ourselves, even if it means walking away--and maybe even staying away--from the places where we came from.