Time ("The Oldest Living Things in the World" by Rachel Sussman) 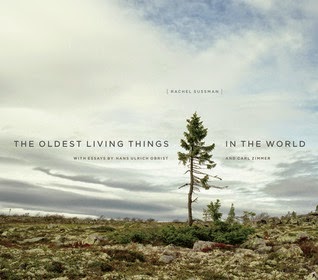 We like to think of ourselves as the crux of history:  time begins and ends with us, and any aspect in which we are not involved in any way is unimportant. And yet, for much of its existence, this great big planet has churned without us, indifferent to our existence--or lack thereof--and unwilling to change itself to meet our petty demands. In fact, in the grand story of Earth, we are a recent addition--a footnote on the very last chapter--as we've occupied space here for less than one-ten-thousandth of one percent of this planet's total existence. We live on a world that we claim to dominate and oversee but in truth barely understand...a world that, were it not for our own irrevocable decisions, would scarcely know or care that we live among its rivers and trees. And so, unaccommodated and ignored, we began to cut and dig and burn; we killed off hundreds of species, leveled millions of acres of pristine ecosystems, and domesticated animals so thoroughly that they are now totally unable to survive in the wild; we changed the very genetic make-up of foods, rendered certain vegetables inedible, and poisoned soil through industrialized farming; we bored through and cut the tops off mountains, dammed up rivers, and emptied lakes; we did all of this and more until, at last, the world finally acknowledged us. In this case, it did so by beginning the long, slow process of killing itself.

This is no longer a debate, regardless of how some choose to distort--or ignore--the evidence; the debate is over. And by demanding the Earth live within our needs rather than vice versa, we have claimed victory over a planet while also unknowingly bestowing ourselves with defeat:  over the next 100 years alone, the Earth's average temperatures will change wildly, affecting our ability to grow food and sustain an adequate water supply; the seasons will become unpredictable, the affects on our health will become even more pronounced, and entire ecosystems will be destroyed. And the greatest tragedy of all is that, on a personal level, the ways in which we will fight the affects of climate change will only exacerbate the problem. In summer, we will turn up the air conditioners even more, which will require more electricity and put more strain on already outdated power grids across the world; this increase in demand means power companies will need to generate more electricity through coal and gas, which pollute the environment and lead to even more climate change. (According to statistics from the Energy Information Administration, or EIA, 40% of the electricity currently produced in the United States comes from coal.) In winter, we will heat our homes with gas or electricity, once again putting stress on our nation's supplies on nonrenewable energy. The longer and more extreme the seasons, the more energy we use.

The evidence of this problem is just beyond our doors and windows. This year alone, while the rest of the world faced an unprecedentedly hot January and February, the United States faced the opposite--a winter so cold that it broke records almost a century old. At the same time, deniers pointed to those same decades-old records as proof that evidence of climate change is little more than a series of freak occurrences, all the while ignoring the fact that freak occurrences are so-called because they happen so infrequently and not, as is the case today, year after year. Unfortunately, it's those who deny climate change who seem to have control over the legislative powers needed to address the causes and, where possible, enact workable solutions to slow down the progression of disaster. (As it's been noted publicly, it's too late to actually stop climate change from happening.) It is therefore up to individuals to find their own solutions and reduce their own negative influence on the environment, even though this means we must sacrifice a little bit of comfort and convenience for the sake of a better, more stable, and more livable future:  little to no air conditioning when possible, reducing car travel to only the most necessary journeys, growing more of our own food and buying food locally, heating homes through renewable resources, adopting solar and wind power, recycling, composting, eating less store-bought meat, and so on. The resources are there, and they are plentiful, but the impetus--and, in our shaky economy, the ability--is not, at least not to a great enough scale that we can have a measurable impact just yet. There are those who have already changed their lives, to be sure, but the vast majority continue on as they always have, either oblivious or ignorant to the harm they are causing.

There are also those few who see the inevitabilities of climate change and are racing to document the world as it is before it's too late. In the case of Rachel Sussman, this means photographing the world's oldest organisms. Traveling to some of Earth's most remote places, one continent after another, Sussman chronicles trees, plants, lichen, corral, bacteria, and anything else that is more than two millennia old. What she finds are astonishing symbols of life and its ability to persevere--living things that thrive despite disease, infestation, age, and human interference. However, the power of these organisms is tempered by the reality that, in our lifetimes alone, many will disappear due to man-made changes in the environment. This, despite having survived so much else, will be their undoing. Many of the living things Sussman documents are protected in one way or another, either through human measures or simple isolation from people--for example, the whereabouts of the oldest trees in the United States are undisclosed to keep them safe, and reaching the map lichens of Greenland (3,000 - 5,000 years old) requires extensive foot travel across a largely uninhabited part of the world. But even human intercession may not be enough for some, unaccustomed as they are to such rapid and unbearable changes.

There are those who might argue that, regardless of their age, these organisms are part of a great cycle of life on Earth, one which not only creates but destroys, recycling itself to make new organisms that can adapt more easily. They might dismiss Sussman's photography, not to mention the passion she has for her subjects and the overall premise of her work, as sentimental or near-sighted or even little more than a Thoreauvian delusion. The problem is that we all belong to this world and are of this world, and when another living thing--especially one that has survived for millennia--dies because of our actions, we are doing something wrong, and it is our responsibility to change. What's more, these organisms--regardless of their age, their locations, their incredible features--are much like us in that they are designed to survive in a narrow range, and any change in that range leads to death. Yes, we are unlike them in that we can move--a redwood, after all, cannot uproot itself after two thousand years--but the point is obvious:  if climate change is hurting them in this way, how much longer will it be before these changes begin to hurt us, too? That question has an answer, and it's an unfortunate one:  the changes already are. We just haven't accepted this yet, even though the world around us--the trees, the algae, the lichen, and so on--has already provided us with all the evidence we will ever need. It is evidence that most of us have chosen to ignore.