Visible ("Beyond Magenta" by Susan Kuklin) 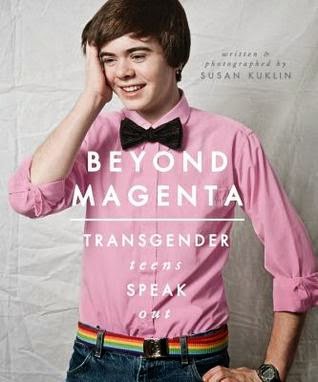 The first recorded use of the initialism "LGBT"--Lesbian, Gay, Bisexual, Transgender--is difficult to isolate. There are educational articles from the mid- to late 1980s in which the term is used openly and without explanation, suggesting an established familiarity:  a denotation that could exist without context or qualification. (It would be popularized in the following decade and become commonplace in the new century.) In a sense, regardless of where it came from, the term itself was a sizable victory in the struggle for equal rights, and for the communities represented in that four-letter term: it endowed a small, virtually powerless segment of the population with a classification based on respect and appreciation for variance rather than on misunderstanding, bad science, and bigotry. The acceptable terms that were used before LGBT, including "third gender" and "queer," had their own separate benefits, but in the end they were far from acceptable; each connoted a sense of otherness, that those with an orientation other than heterosexual were not "normal," that they were quite literally strange and different, worthy of skepticism, isolation, and prejudice.* Finally, with "LGBT," there was a way in which those fighting for equal rights could speak of themselves without denigrating their very existence at the exact same time.**

That is, unless you identified with the "T."

Over the last decade, as marriage equality and gay rights have become not only socially acceptable but also the law in many states--and, in due time, the nation itself--the faults of "LGBT" have become apparent, at least where it concerns those who are transgender. For even though gays, lesbians, and bisexuals are seeing their relationships--and, in essence, their entire existences--validated through law, with hundreds of rights and responsibilities now open to them, trans individuals have been left behind...or at least found themselves in situations that are both strange and unthinkable. As the Human Rights Campaign points out on their website, a trans individual--say, a trans man who was born a woman--should be able to enter into either a same-sex or opposite-sex union, depending on the state in which they live and how they choose to identify themselves.*** However, laws in this specific instance are vague, trapped in thinking that is not only outdated but often-times offensive. (The HRC cites a 1999 court case from Texas in which a woman's marriage was invalidated after the death of her spouse, simply because she had been born a man; because of this, she lost the ability to sue for wrongful death, inherit his estate and Social Security benefits, and so on.)

Unlike the gay, lesbian, and bisexual communities, transgender individuals do not have an army of trans crusaders on their side fighting for laws that specifically address their needs. There have been trans mayors and council-members, yes, but there has yet to be a Barney Frank or a Tammy Baldwin of the transgender community--an openly trans or gender-nonconforming individual elected to a prominent national office. And while there are public figures who have spoken out in support transgender rights and introduced legislation to further the cause, their numbers pale in comparison to those who support the gay, lesbian, and bisexual community. (For example, there are currently 6 openly gay or bisexual members of Congress, the largest in history; there are no openly trans members.) When marriage equality and gay rights finally become solidified in law, the "LGB" community will have crossed a wide and tempestuous ocean; the "T" community, unfortunately, will still be miles from shore, much of their lives still caught in a legislative limbo.

In photographing and writing about trans individuals, Susan Kuklin highlights important similarities between the gay and trans communities--feelings of isolation, confusion over identity, a rejection of standard gender norms--but allows her subjects the chance to avoid overt comparisons by discussing their own struggles at length. Most of their stories are heartbreaking, and unavoidably so:  they are raised by parents who don't understand the struggles of their children, much less what "transgender" even means; they attend schools where gender expectations are enforced with rigor and occasional cruelty; they face medical professionals whose expertise does not extend to the space beyond "male" and "female"; and they transition in a world that rejects variance and aberration. And yet they persist, not just because they want to, but because they have to. It's a testament to the character of Kuklin's subjects that they can so openly express their identities--one teenager, Cameron, discusses gender with the confidence and insight of a professor--and so passionately fight against the prejudice inherent in our world while also leading lives that, to any observer, personify what we consider "normal." They date, they fight, they laugh and cry, they express themselves through art and speech and fashion, they go to school, they graduate, they drop out, they question and they demand...and they do so as outliers in a society that often claims to appreciate those who stand out, that does not guarantee health care or insurance for their needs, does not make room for them in its two-genders-only structure, does not consider their relationships legitimate, does not protect them in the workplace, and still insists on scapegoating them as the cause of transphobic abuse.

Those affected by gay rights and same-sex marriage face many tumultuous issues in their daily lives--visitation rights, adoption, spousal insurance, legal documentation--all of which are so thoroughly entrenched in our culture that it takes laws to undo them. And yet these problems seem almost otherworldly when compared to the prejudice faced by transgender individuals, which is so ingrained that even the most basic aspects of everyday life--public bathrooms, drivers licenses, clothing--become constant reminders of just how unaccepted they are. None of which will be solved by gay marriage, as important a step as that will be, and none of which will be solved by many of the gay-rights laws currently being proposed, as important as those steps are. Transgender rights are an important part of the LGBT movement, but at some point their crusades will part ways, and that is where the problems will begin...because how can a movement celebrate progress when 25% of its identity focuses on those who still suffer under inequality?

Every generation faces its own moral crusade, and it's their responsibility to overpower the prejudices and correct the errors of those who came before them, including their parents and grandparents. For those born during and after World War II, it was civil rights for African-Americans, which younger Americans favored at much greater rates than those who were older and had lived with Jim Crow for much longer; their children fought for women's equality, as personified by the second- and third-wave feminist movements of the 70s, 80s, and 90s; and now, as the "millennials" become an increasingly significant part of the voting population, they lead the fight for gay rights, having grown up surrounded by openly gay friends, family, classmates, and public figures. Those who are 25 years old and younger do not believe that sexual orientation matters, though they recognize that bigotry towards those who are gay or bisexual does, and it is because of this generation--my generation--that gay rights is inevitable. The question is that, once gay rights are codified by law, will there still be fight left for the transgender community, too, or will they be ignored until the next generation--a ship of millions left to sit lonely along the horizon, ignored by the righteous many who've already landed on shore?


*Today, "queer" has been resurrected as the most all-encompassing term, incorporating not only gays, lesbians, and bisexuals but also the transgender community, pansexuals, asexuals, and every shade of non-heterosexual in between.

**As an initialism, "LGBT" is fluid. Over the years, and especially in the last decade, it has been revised to include Q (questioning/queer), C (confused), I (intersex), P (pansexual), A (asexual), O (other), and so on, to the point of it being a sort of in-flux alphabet soup. As there's no one consistent, universally accepted initialism, I use "LGBT" throughout my review, as it fits with the purpose of Kuklin's book (and embodies the greater problems raised by such a wide-ranging categorization).

***The specific information can be found here, where it is explained much more clearly.
Posted by Adam at 3:33 PM