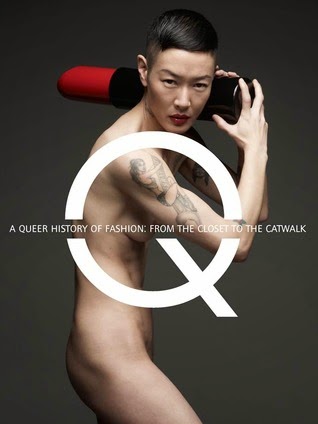 The only fashion book I own--and the only one I will probably ever own--is Alexander McQueen: Savage Beauty, which was published--fittingly enough--by the  Metropolitan Museum of Art after the designer's 2010 suicide. I knew very little about McQueen outside of what had been repurposed for his obituaries, and internet photos did his work little justice, so the hefty tome seemed like a justifiable purchase. Needless to say, it sits with a place of honor on my shelves, though because of its size it must sit awkwardly, edging out other books while demanding to be noticed--a perfect metaphor for the fashion of McQueen himself. What makes McQueen's pieces so worthy of publication is that, besides being works of fashion, they are also works of art in that they could easily--and sometimes only--sit in the wings of a museum among paintings and sculptures, rather than from the shoulders of a model or client, and still have the same effect on passers-by. Where one of McQueen's pieces--the gazelle-antler jacket or the crucifixion-print shirt, for example--may be stunning on a catwalk, it would be just as equally impressive put on display, where the emotional appeal and symbolic undertones could be appreciated as though it were an O'Keefe or Picasso, ripe for understanding...though perhaps unwilling or unready to be understood.

Appropriately enough, it is McQueen himself who, through his own words, answers a question at the very heart of A Queer History of Fashion, a collection of essays and photographs from Yale University Press. Valerie Steele, opening her eponymous  contribution with a series of questions, asks in essence why an institution so universally recognized--fairly or unfaily--as a bastion of LGBTQ creativity never been examined as such in an academic setting. She asks this, not just as a defense of the exhibition on which this book is based, but because she's genuinely curious and, as it happens, not entirely incorrect. So ingrained are the queer-fasion stereotypes--again, whether they're fair or not--in fashion culture, not to mention basic world culture, that we either accept them without question or find ourselves too afraid to delve further...for fear of stoking homophobia, promoting stereotypes, or focusing on the sexual orientation of designers rather than the quality of their work, whatever the reason may be.

And in asking this question--what drives these perceptions of fashion designers, and why do we not study it more?--Steele offers us answers from a variety of important figures past and present, including McQueen himself, who once said, "My collections have always been autobiographical, a lot to do with my own sexuality and coming to terms with the person I am--it was exorcising my ghosts in the collections." A few pages later, another designer, Karlo Steel, is quoted as saying, "When you're growing up and you realize that you are different from everyone else, that feeling of being different can often be alienating. At a very young age, queer people tend to create their own reality as a place of refuge. Often it's a place of beauty." Taken together, these two ideas--fashion as exorcism, fashion as refuge--seem to be almost contradictory, with McQueen expressing a belief in fashion's ability to bring things out--a physical, external release--while Steel believes in the safety of fashion, an internal soothing. However, taken in context with  both designers' sexualities, they are one in the same idea, as both underscore a reckoning with self.

Even today, most LGBTQ kids grow up in environments that are not conducive to acceptance and belonging:  if their parents and family accept them, their classmates may not; if they grow up in bastions of liberal politics and equality, they can easily turn on the television or find online platforms for those who believe in the "other-ness" of queer people and find themselves demonized from a distance. The progress of the last 40 years--or the last 10, or the last 5, or the next 5--does not erase the deep inequalities that still exist in our society and culture where gay and trangender rights are concerned, and at an age when identity is already a complicated personal issue, adding sexuality to the mix can only cause further turmoil. It is here that fashion plays a role in the formative years of LGBTQ boys and girls alike, as it gives them an outlet they would otherwise not have--a way in which they can express and  understand  themselves slowly, without the pressure of being "out" before they're ready. Fashion serves as both a safe place and the force disassembling that very same fortress brick by brick--refuge and exorcist simultaneously.*

Which offers us perhaps the only honest answer to Steele's question as to why a book such as this has never before been written:  its existence speaks to an unnerving truth about our world. If we take McQueen and Karlo Steel's words to heart, it means that much of the beautiful fashion we have today is the result of young men and women reacting to the hatred, confusion, homophobia, and even self-loathing in their own lives. Yes, they produced stunning, personal works as a result, but is the end result worth enduring its cause? Many artists throughout history have been haunted by demons, and it's difficult to say how much of their work was inspired--if that is the word--by internal struggles rather than external stimuli.

We can never know what would've happened to Alexander McQueen or Christian Dior or Yves Saint Laurent had they grown up in a world in which their sexuality was as important as, say, the color of their eyes or the length of their hair--that is to say, not important at all--if they still would've become fashion designers, and if their work would've had the same effect, without the same haunting past...no demons to exorcise, no refuge to break down.** Books such as this do not exist in great numbers  because understanding the history of queer fashion requires us to understand the history of inequality and suffering, and attempting to reconcile that with the beauty we see is a paradox without an answer.


*The essay that follows Steele's--an examination of 18th century fashion, written by Peter McNeil--provides an interesting contrast in that much of the "queer" fashion of past centuries was mostly worn by LGBTQ people rather than made by them. This shift is yet another condemnation of the change in our culture over the last few decades, as those who lived in the 18th century were less constrained by gender roles and sexual repression, though problems of prejudice and violence still existed.

**As Christopher Breward writers in his essay on courterier autobiographies, "On the actual sexual preferences of [courteriers like Dior] I remain uninformed and respectfully silent--maybe they have no bearing at all on the powerful legacy left by their extraordinary work. But in some sense the delicate question of queerness in couture and its material manifestations requires no answer."
Posted by Adam at 6:32 PM