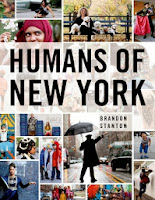 A few years ago, I was talking with a student of mine between classes when she made an offhand comment that startled me somewhat. "I bet you wish we would just be normal," she said offhandedly, in the same way someone might read the lunch specials at a restaurant or remark on the weather. The "we" she was referring to was her group of friends, all of whom were high-achieving Honors students known for their artistry--singing, photography, creative writing, painting, acting, fashion, and so on. They were also known for being what high-schoolers might call "weird" and adults call "eccentric." However, I'd known them long enough to know that they weren't weird or eccentric--they were simply being themselves in an environment that demands conformity, silence, or both--and I responded to my student's claim by telling her quite simply that "Normal is boring."

What's strange is that, besides being designed to make her feel better about herself or her place in the grade scheme of high-school politics, those three words are actually a good way of approaching the world around us. We like to think--and society likes to tell us--that to be a part of the majority is to be a buttoned-up mass of trends, routines, and near invisible differences. Those who defy these prescriptions--those who dress against the current, break with expectations, and emphasize their uniqueness beyond the point of avoidability--are the outliers of society, the "other," the weird and eccentric and impure. They are strange and therefore deserve to remain strangers. Something has gone wrong, we're taught to think, and this is imprinted so thoroughly in us that is causes our entire bodies to reshape themselves into hunches, scowls, and dodging eyes. We're taught to walk past and ignore, to chuckle, to dismiss...all the while, unbeknownst to us, these actions instead make us the outliers. What we don't understand in these moments--but what people like Brandon Stanton realize and embrace--is that "normal" is the outlier and "different" is the norm.

As Stanton himself notes in his introduction to Humans of New York, a book of his photography, he has taken thousands of pictures throughout New York City, from its city streets to the alleyways of its boroughs and every crevice in between, always focusing on people. And what he finds are not outliers or cast-offs but people more human than any of us could possibly imagine...simply because we don't try to imagine. We are content to live within our preconceptions, judging those who are not like us as unworthy, strange, or dangerous...and it's by that criteria that we allow those millions of other human beings to remain at a distance. And in doing so, we lose beautiful connections that could have transformed our lives. It's like living your entire life surrounded by the ocean and never once wandering down to the shore to dip a toe in the waters.

﻿
Every single person we meet in Stanton's book has a story all their own, some of them spoken and some unspoken. There are tales of of being a good father or a bad son. Of being a drug user...or the friend of one...or a recovering addict trying to navigate a strange and dangerous world. Every one is an immigrant in their own way--some literal, most metaphorical--and they are all strangers to us, though Stanton collection argues they shouldn't be. Even with the distance that separate us--between where we live, between reader and subject, between generation and ethnicity and status--we can know one another, simply by looking past our own snap judgments and searching out the humanity in one another.

﻿
﻿
We only have a short time on this planet, and there's much to learn--too much, it turns out, for one lifetime, and so we need to be discerning and curious and patient. There are seven billion of us, which means there are seven billion stories out there in need of hearing, regardless of how hesitant or unsure the storyteller may feel, and the ingredients in that mixture are constantly changing:  stories we have today may be gone tomorrow, struck from the page by illness or death or the haphazardness of human memory. Brandon Stanton's book is a fantastic read, yes, but it's also a guide on how to be a good human being...because being alive isn't just about living for ourselves. It is about living to know and love others and, in doing so, understanding ourselves better so we're no longer a diverse world of strangers.
﻿
﻿﻿﻿﻿﻿*All screen captures and captions were taken from HumansOfNewYork.com.