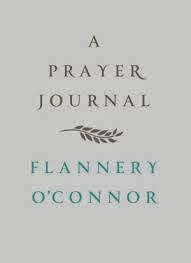 "Dear God, I don't want to have invented my faith to satisfy my weakness."
--Flannery O'Connor, A Prayer Journal
Were I ever asked to choose the one American author whose writing best represents our country--its promises and lies, its perfections and blemishes, its benefits worthy of praise and its mistakes worthy of shame--I would overlook the obvious choices, the Hawthornes and Melvilles and Twains and Fitzgeralds, and choose Flannery O'Connor, a Southern woman who lived her life away from the public eye and died of lupus at the tragically young age of 39. Thankfully, this task of choosing will never fall on my shoulders, but if it did--if a task like this were ever to exist--O'Connor would be far from a popular or obvious choice. Her works are centered around the brutality and viciousness of human nature, the emptiness of our relationships to one another, and the conflict between what society expects of us and what we're willing to offer. There are no dreams fulfilled in her world, and more often than not America's innocent lambs fall victim to its guiltless wolves; anyone hoping to find peace or prosperity had better look elsewhere.

Nourishing all of this is a heavy current of Catholic dogma, which imbues many of O'Connor's characters with a delusional belief in their own wisdom and superiority that, sadly, does not translate well beyond the walls of their hearts. We mock these characters for their haughty ideas, laugh at them as their worldview becomes increasingly ridiculous-looking, page after page, word after precious, gnawing word. I think of the young man at the end of "Everything That Rises Must Converge" who, not understanding his mother's racism--her inability to accept that African-Americans might have the same things she does, whether it be a physical hat or a metaphysical right--looks down on her as though she were a child in need of scolding or a condescending education. He doesn't understand her, even though he never ties to, so much so that when she walks away from him at the end, he stands in bafflement...all the while, we look down on him for his immaturity and detachment, his need to seem better than what he really is.

Flannery O'Connor is this young man--or at least was, according to a journal she kept during her stay at the Iowa Writers Workshop. She was a young woman at the time, not yet 20 years old, and only a few years away from the start of her burgeoning literary career. As the short introduction to A Prayer Journal tells us, O'Connor lived modestly at the workshop, keeping refrigerated items in her dormitory window, and matched skills with the other attendees, most of them men (and many of them assuredly veterans of the war who'd recently returned home). But despite her modesty and anecdotal confidence, her journal reveals a soul tortured by its--her--inability to connect with a God who she simultaneously looked to for blessings and pleaded with for affection. She is a tortured Catholic all her own, one so thoroughly invested in heavenly intervention she seems to offer her workshop stories at the altar in much the same way a mother would offer her child. She believes wholly in God's powers while seeming skeptical of her own...and that struggle, between faith and skepticism--between the infallibility of one and vulnerability of another--haunt her journal's 40 pages, a slimness possessed by depth that could fill volumes.

There are few proper nouns here, and even fewer glimpses into her private life:  it is just Flannery O'Connor and God in these pages, rendered with the same nuance, joy, and confusion that one might use when writing about themselves and a parent, or themselves and a lover. One of the journal's rare moments of personalness comes at the very end--in fact, its second-to-last line--when O'Connor makes a confession of sorts:  "Today I have proved myself a glutton--for Scotch oatmeal cookies and erotic thought" (40). Taken on its own, this one statement seems pointless and snarkingly self-punishing; taken with the previous 40 pages, however, we see that O'Connor's "hunger" is possibly--probably--much more metaphorical than we might like to admit. As she writes on page 23, "The desires of the flesh--excluding the stomach--have been taken away from me. For how long I don't know but I hope forever. It is a great peace to be rid of them." In these two short, separate excerpts we see the totality of O'Connor's world--a distrust of all urges beyond the simplest, a relief when rid of them, and a willingness to give in to them and more, all mixed into the same body, the same mind. It is Catholic contradictions at their most pure and poetic, erotic thoughts being lumped into the same category as cookies, both seen as satisfying inner cravings that defy a Christian purity.

In her journals, O'Connor strives for perfection and understanding--the ability to write stories with God's guidance but also for his appreciation--while also dismissing knowledge as something dangerous to achieve, saying, "No one can be an atheist who does not know all things. Only God is an atheist" (25). This is a paradox of the tortured thinking, a belief that knowing all can only be accomplished through God--or only by God--but knowing all will also make God irrelevant, like a dream dispelled by waking into fact. O'Connor's entire religious life seems mired in paradox, in an inability to reconcile God's demands of her with what she demands of herself, and as a result her journal is a road-map of her soul that doubles back on itself and never fully reaches its destination. Which is exactly the struggle faced by so many of her characters:  an attempt to get from one place to another, whether literal or figurative, and realizing that their destination wasn't the place they hoped it would be in the first place.

And isn't that the story of America itself? We are a paradox, not of rock or river or soil, but of flesh, sweat, and blood. We arrogantly demand others' praise--an acknowledgement that we are the greatest, God-gifted country in the world--while filled border to border with turmoil over our many unresolved moral and ethical issues. We claim to be a united nation "under God," but we are a nation of many gods--some religious, some political, some material--that looks for salvation from beyond without looking first within ourselves, where much of our salvation lies. We celebrate our every progressive achievement, even when there are twenty or thirty nations who've hit that milestone before us; we congratulate those who break barriers and elevate themselves--and, in essence, elevate the collective us--while also looking for ways to bring them back down to our level, lest someone be better than us. We are the old woman in turmoil over what others have, and we are her spoiled son not understanding this hostility. We are the parent and the child in one, and in Flannery O'Connor--the fatherless daughter, the doubting devoted Catholic, the bedless lover--we see ourselves for all that we are, for all that she was.

There are very few instances in which a Flannery O'Connor character finds him- or herself better off in the end; in fact, her characters are almost always worse for the wear as the story draws to its close, and O'Connor's attitude towards this is one of not only acceptance but resignation. Our lives are tortured four-act tragedies, and we are the bit players--the hungry college writers hunched over their journals, praying in words to a God who seems unable--or unwilling--to read them.
Posted by Adam at 8:46 AM