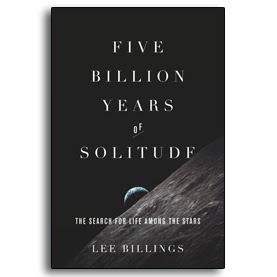 In the final chapter of Lee Billings' Five Billion Years of Solitude, after more than 200 pages of dense exoplanetary prose and interviews with respected astronomists, we're introduced to Sara Seager, a middle-aged scientist at MIT who is one of the world's foremost experts on exoplanets--that is, earth-like worlds existing beyond the scope of our current scientific reach. Unlike the book's other chapters, however, Seager is introduced to us not through the complexity of her research, the revelations of her writing, or her influence on the next generation of astronomers--all of which is important and comes later--but through her relationship with Mike Wevrick and the long canoe trip they took through the empty tundra of the Northwest Territories.

For sixty days, Seager and Wevrick made their way through the wilderness, never once encountering another human being outside of a small outpost and the skeleton of an old Inuit whose grave had been ransacked, leaving his or her skull exposed. They engaged one another in long conversations, observed the beauty of a seemingly barren part of the world, and became closer as a couple. They also spent long moments in silence, not unlike that of the same universe--our universe--which Seager would soon spend her life studying. When they returned from their trip, Seager now destined for Harvard graduate school at only 22, they moved in together and, some time later, married and had children.

Years later, their children still young, Wevrick was diagnosed with intestinal cancer--a result of Crohn's disease--and passed away after a short battle, leaving Seager a widow at 40 with two young boys, a burgeoning professorial career, and the future of space exploration on her shoulders. When Billings meets Sara Seager, he describes a woman who is stretched thin, her life a desperate attempt at balancing her responsibilities to the science field and her responsibilities to her children, both of whom show little interest in their mother's profession outside of its similarities to Star Wars. Nevertheless, Billings also finds himself impressed by her ability to do so much  with so little time, and her willingness to embrace the wisdom delivered by her father on his deathbed:  "I never want to hear you say that anything is the 'best' you can do. I never want you to be limited by your own negative thinking." In the middle of her life and the highest point of her career, Seager is still pushing herself into new fields and struggling with even more difficult questions.

This closing chapter, which rarely touches on the minutia of Seager's expertise, is a marked contrast to the previous nine, which are written in such a way as to bridge the personal stories of scientists with their fields of study, all of which are in some way impacted by the search for exoplanets. More often than not, these bridges collapse under the weight of technical information, much of which is written about in a dry, droning prose that causes the mind to wander; only when Billings focuses back on the stories of those involved does his book regain its footing, and we reach the book's end wishing he had written the first nine chapters in the same way he writes the tenth.

Because what makes the chapter on Sara Seager so interesting is that, unlike many of Billings' other subjects, Seager opens up her life in a way that allows us to see the relevance of planetary science as something more than just a desperate search for fame, patriotism, or scientific understanding. A search for life in the vast, empty universe is a search for a better understanding of ourselves. We want to see life beyond our own world, not just to settle the debate over extraterrestrial life, but to compare that existence to our own. Are they more or less intelligent than we are? Are they scientifically literate? Do they have social classes and hierarchies? Do they look like us? Have they taken care of their world? Do they wage war? Do they have music? We seek these answers, not because we're vain, but because we're afraid--afraid that we're not as good as we could be, that we're not as smart or developed as we think we are, that we're somehow foregoing our own possibilities as a species or committing sins against the very rare world we call home. We fear that, in the great community of space, we are the seven billion outliers who don't belong.

And, more than anything else, we fear being alone. The night sky holds billions of stars, and beyond those there are billions and billions more, and the very idea that we might be alone in the universe, fully and irrevocably alone, worries us to our very core. The idea that this precious blue marble we call Earth, so comfortably distant from the sun but also close enough to sustain life, is a galactic fluke unreplicated anywhere else, and that we're the only source of intelligent life in all of existence--that our world alone possesses the gift of music and love and friendship and curiosity--is an unsettling condemnation of how little we appreciate just how special we might be. As we pollute ourselves ill, shout ourselves hoarse, devalue ourselves to the point of suicide, become angry to the point of violence or revenge, bomb ourselves to dust and commit genocide against our neighbors, the universe looks back at us as its only heartbeat beyond the pulsars of lifeless matter drifting so quietly through the vacuums of space.

When Sara Seager opens up her life to us, especially as she remembers her late husband while their sons sleep in nearby room, she is demonstrating the fears we all feel when we stand beneath that night sky and wonder, either out loud or silently to ourselves, if we're alone. Because loneliness, for all its occasional benefits and virtues, is a disheartening condition after so much time, and never more so is this apparent when we think about our tiny world rolling gently in the cradle of the universe, alone, for billions of years. When we search space for other life, even if that means the possibility of a world like our own light years away--an unreachable distance in anyone's lifetime--it's no less emotional of a search than when we look across our own world for a companion, for a connection to our parents or children, for a memory of someone who's forever gone from our lives but shouldn't be.